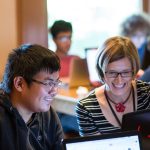 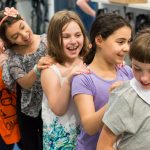 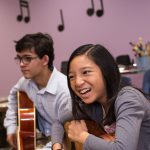 Early in the faculty meetings planning for this year, Jake Lahey, our 7-8 history teacher, wondered if we might create an interdisciplinary study that asked students to consider the history and processes that humans use to get energy from the earth. After our successful engagement with the students in 7-8 around the issues of access to water, we were eager to create a similar experience around another important issue.

Students are spending the vast majority of three school days intensively working to understand how people generate power and which of the methods are most sustainable.

Our first day started with an opening plenary session where students looked at maps of global and USA energy use and sources. They made comparisons and asked questions of maps of the data. We broke them into four groups named after an ancient “element” that we get energy from: earth, wind, fire, and water. Each group moved to a classroom to begin research.

The students were charged with creating a pictorial timeline of the technology history of an energy “element.” The wind group, for example. started with the sail from ancient times and charted to wind farms in modern time. The earth group, in another example, started with the fuel of wood and moved to petroleum.

Next, working in smaller clusters of two to three, students designed a way to model one way that their “element” generates power. They were asked to draw and design, and plan for materials.

That planning was followed by a day of building. The Holford Learning Commons hummed with industry. Models were constructed of cardboard, plastic, and in one case, cake! Some models represented the parts but did not move. Others had moveable parts. In the “fire” room, solar power actually baked s’mores– more than just a model, it was a demonstration!

Today met the gold standard for engagement: Had all the adults melted away, the students would have taken quite a while to notice. The modeling was fun– and sometimes a little frustrating– in a good way. You can get a sense of the project from this video.

A museum will be created for day 3– and also a chance to get back to the big question of our study: Now that we understand where energy comes from, are we running out of juice?